Ok, I’ve put off publishing a long letter, and so here is one, and one that shares more personal content about myself. Before I began working on this project, it occurred to me that Jason ‘s letters contained some very personal information, and I asked him about if that was a problem, as I chose what to publish– and he said it was not. But I hadn’t thought much about what I’d shared in my letters to him, and how I would feel, sharing this stuff.  My decision: to just do it- share openly without edit. I simply needed to get ready to actually do that. Here goes.

One thing that I’m struck with as I look back over these old communications, was my obsession with reusing materials. Paper bags, old envelopes, old Xeroxes. Then, I think I was just really focused on being a good steward to to the planet. Now, I also see it as an effort to share parts of myself. Although, now, I also see it as pretty weird. It’s a wonder I dodn’t scare Jason off real quick. 🙂

Another thing that strikes me is the pure openness with which I shared myself, even as it now reads as fairly neurotic. I just put me out there, and as I read these letters now, it was a “me” that I am proud to have been.

Maybe I am obsessing about you. I seem to be writing daily. I don’t think this is obsession, just a desire to connect and let you get to know me, and me get to know you. I must admit, I’m thinking about you a lot too. I really like talking to you and part of me has wanted to call. Fortunately the other part of me remembers that the phone bill is already going to be bigger than I would like to see. So I’m going to save those calls. I do have an idea, and will stop at the store on my way to a meeting tonight.

I’m listening to Natalie Cole’s new album as I write/make dinner tonight. She’s singing “the very thought of you…” It’s raining now. I wanted to take the dog to the park but not in the rain. So I’m doing dishes, cleaning off the kitchen table and doing some things like writing you instead.

I’m going to Kinko’s to Xerox a bunch of mail art stuff tonight after the meeting too. When I fill up this bag I’ll right on some of it.

I made a set of nine postcards to send to South America. I think I wrote on a xerox of the call for work last week. The photo is one of my new self portraits. Put together they form the photo and I plan to mail one part every day.

Change of plans. I’m not going to a meeting tonight. I went to one on Monday and Wednesday, and I’ll go tomorrow. Saturday and also Sunday so I think I can stay home tonight. It’s stopped raining and after eating (I still haven’t eaten) I’m going to take the dog up to the park.

Just got back from the park. Dog did OK- not great, but OK. It gets so frustrating trying to work with her when she isn’t paying any attention. If I get frustrated she seems to pick up on it and goes into fear mode and even less gets accomplished. She must’ve been beaten by her previous owner, and while I haven’t beaten her I admit to you at times wanting to. Old “tapes” die hard and why won’t you listen to me” plays in my head too often. I’m going to stop for tonight and will write tomorrow- good night

Just got home from taking the dog to the park. Your “bakery” postcard arrived today I am guessing it was mailed on Monday??  I did have a good day Monday but I already wrote about that. Today was a so-so day. Felt kind of irritable all day with really no reason.

Some big stuff or at least risky stuff about the gallery, and the roundup. When I am feeling unsure I seem to fall into irritable this as a defense.

I seem to stop in right and then go on with what needs done and then stop and write again later. Went to a meeting last night. My sponsor gave his lead. I really didn’t know too much about him when I asked him, I guess I follow intuition much like you were talking about. He is the right sponsor for me now.

This is my last letter of this type for a while I think. Not my last letter. I’m going to try setting aside some time once or twice a week right then- not this continuous kind of thing. I guess I am at a stage in this new relationship where I’d like to be talking daily- but due to the distance that isn’t really feasible- so this continuous writing seemed closely related. But it isn’t because it is only one way (well no direct feedback thanks to the post office, feedback takes about a week). I guess I long for directness. That’s why our phone calls have been so wonderful for me. So I’m going to look at this new time for writing as kind of a “visit” instead of a conversation.

While it is sometimes hard to remember, this meeting (you and I) was arranged by higher power so I’ll let it go- instead of want it to be more/ different. I knew how to talk to someone daily. I don’t know how to write once a week or so, and feel secure.

I am excited however, that this is different from past relationships tells me that I am growing. That sanity and peace and intimacy are in my future. Already in my present. What I’m writing makes sense to me but I’m not sure how well it is coming out.

It’s almost time to take the dog to obedience class so I want to get this to the post office beforehand then I’m going to work on art work this afternoon. I miss you I’m sending you a huge hug. And kisses. (This sounds much more corny that it feels) 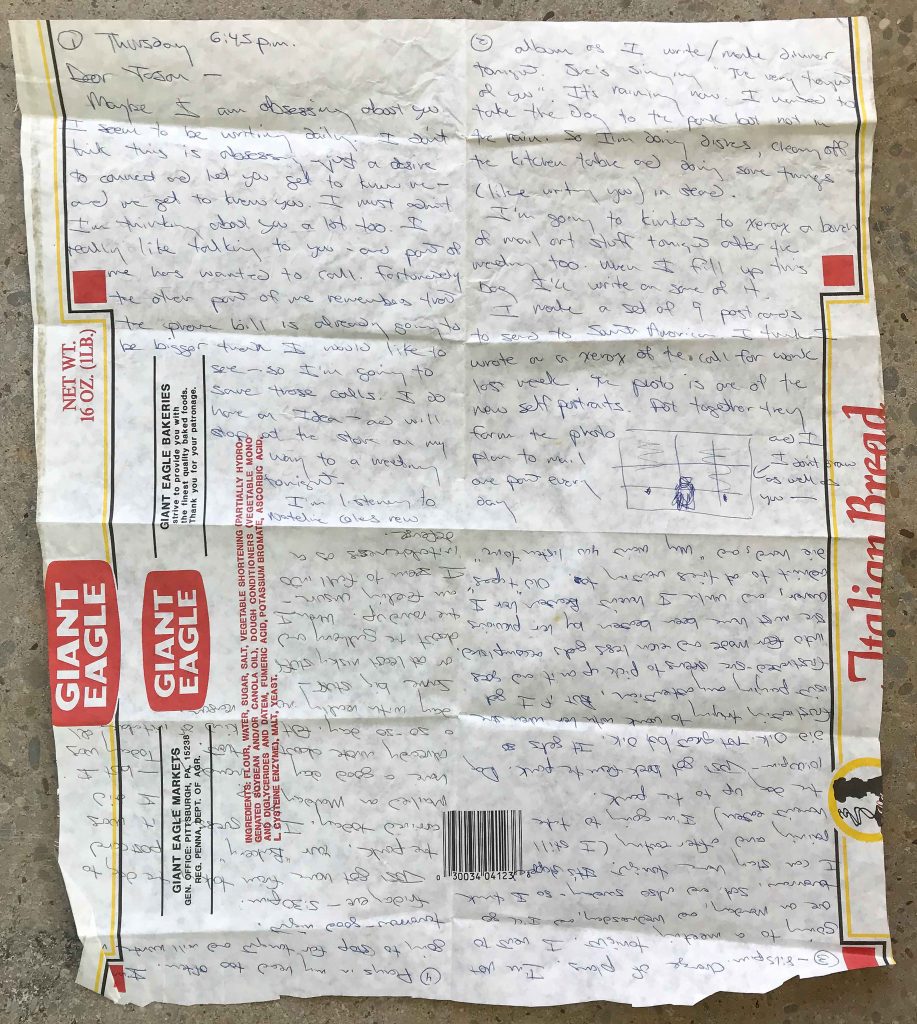 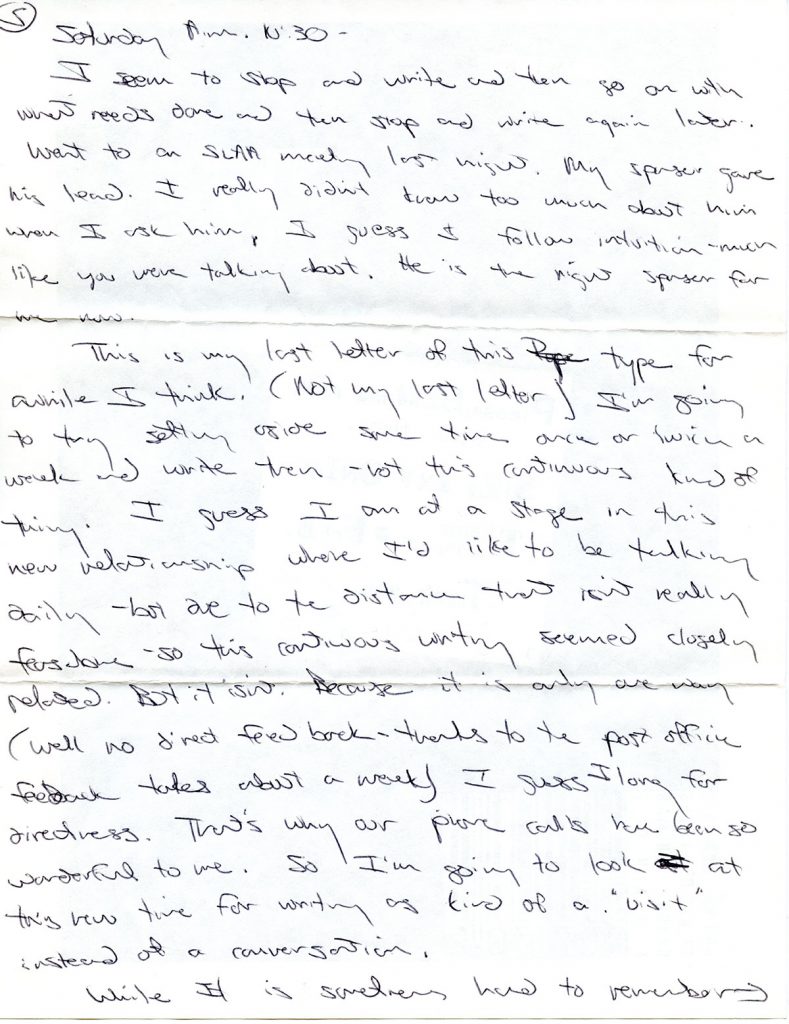 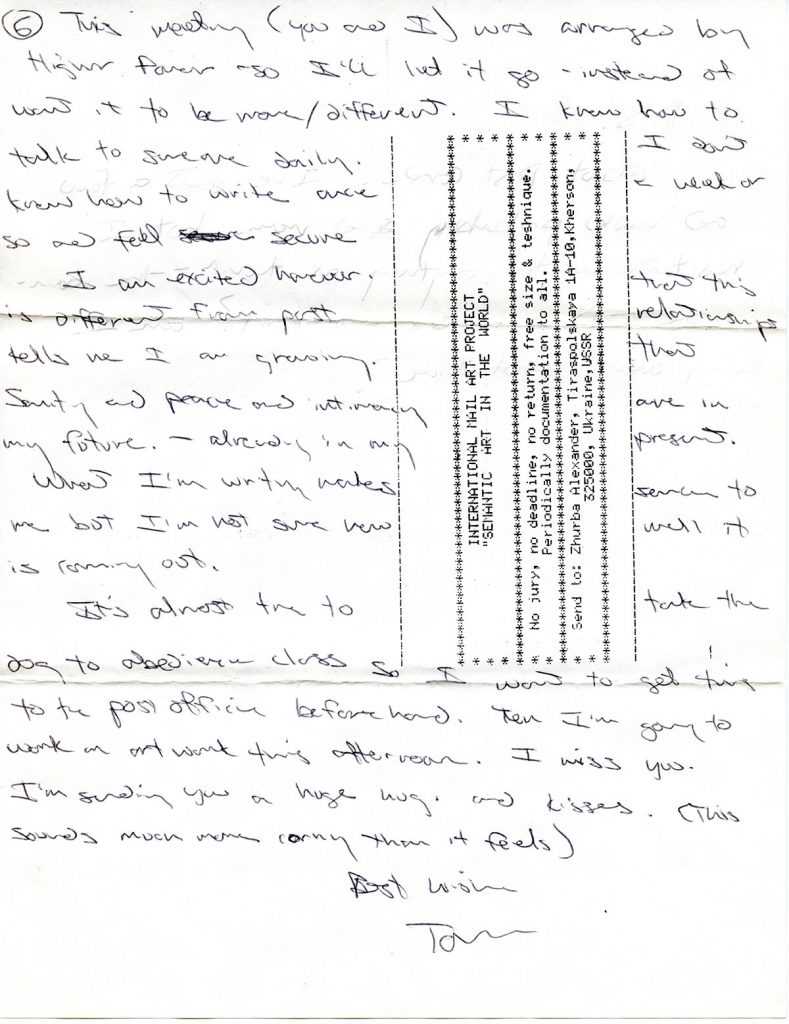 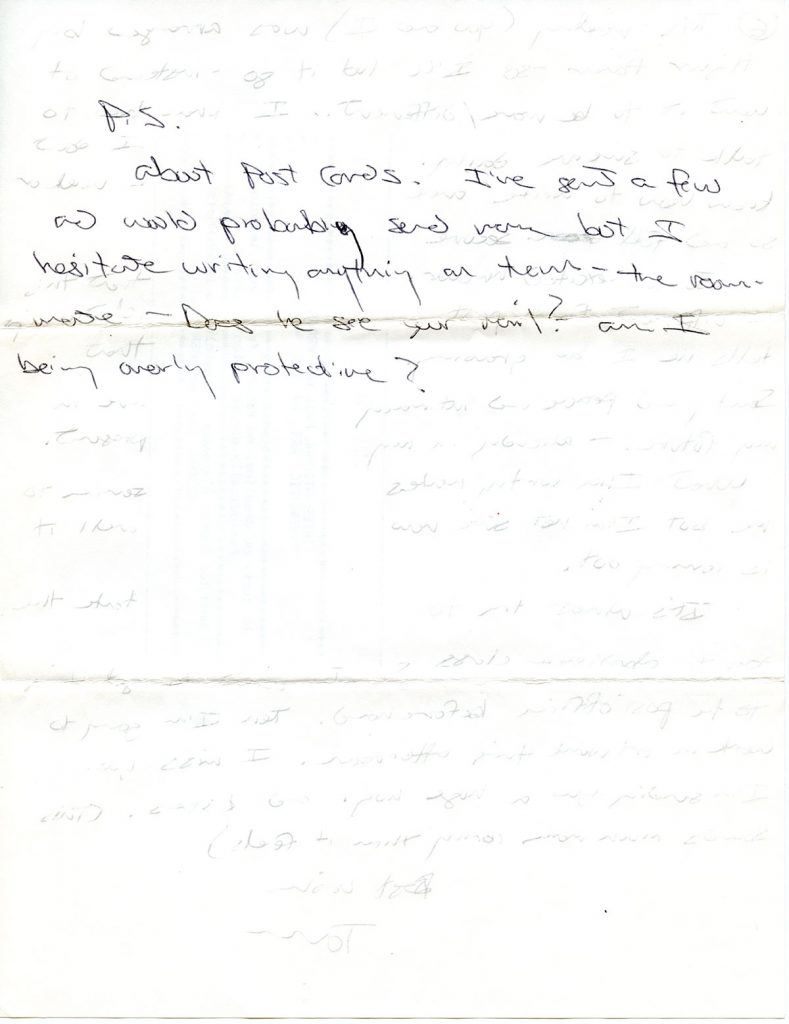